I just go home from work (I’ve been working for a month now) and have the rest of my assessment by the county clinician this afternoon. A lot of anxiety and depression has surfaced since I returned to work. It’s a simple job, yet I don’t feel I’m doing very well. Constantly being “corrected” it seems, though probably not as often as it feels. I feel like I’m losing what spark I had in me. Falling flat. I can’t pretend anymore. I can’t always be UP if I’m to work on this. Without therapy, I ignore my illness while it’s behaving itself and staying hidden, not abusing myself or exploding at others. That hasn’t worked. So, I have to live with all the emotions right at the surface, staying there because I’m trying to do something about them. Without hurting myself. I really want to self medicate right now. Stuff it all down under numbness. So much pretending that my life is ok! It’s exhausting! My life is filled with blessings in the people who care about me. But I still fall apart at the slightest conflict. I feel very incapable. Feeling sad, scared and frustrated.

Yesterday I had a psychiatric evaluation. the hard truth was put before me. Yet another specialist has confirmed my having BPD. It hasn’t gone away, and doesn’t look like it ever will. I feel depleted inside. Empty. For the most part, the last few months have been good. Better that it’s been for a long time. But just when I realize this, something triggers me and my anger. I’m feeling really sad about this. The mountain continues in front of me. Upward and onward. 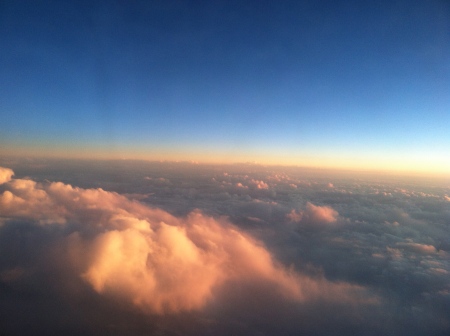 The sunset, seen through my window on the jet. Above the clouds. Is this where Heaven is, if there is a heaven? You can even see the curvature of Earth!

It’s been gone awhile now, the feelings of depression, fear, anxiety and wanting to self harm. I’m happy, but apprehensive. I can’t remember the last time I went this long, feeling good. Judging by the past several decades, it may be temporary, a gift. I doubt it’s gone for good. Life just doesn’t happen like that. Neither does mental illness. Perhaps I am ready to move forward, move on. Whatever the reason, I’m enjoying it. Hence, the decrease in posts lately. I may not be writing as much, but I will continue to read, like and comment on as many of the blogs I follow as I can. I do anticipate spending more time trying to get a job, out walking and hiking with my dog, gardening and spending time with my family. I may even take up drawing again. I took the following photos on a wintery morning in Wisconsin and would like to try and draw them. They remind me of the beauty that can be a part of winter, but also why I moved away from Wisconsin weather. 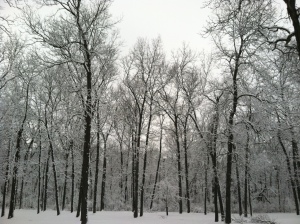 A grove of snow wrapped trees.

I took these at the Three Pillars Village on the Square grounds next to the Bark River, in Dousman, WI 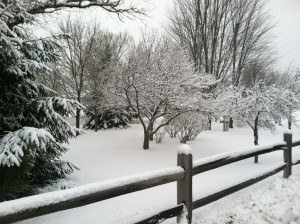 Perspective … along a fence 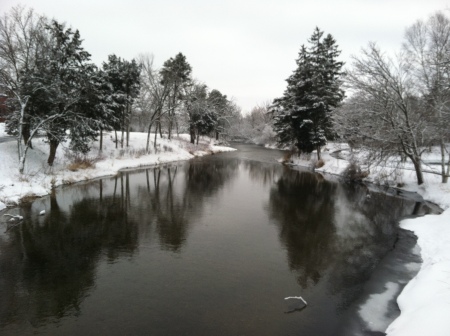 I love the reflection on the water. 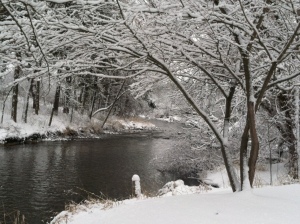 The river winds away into the distance 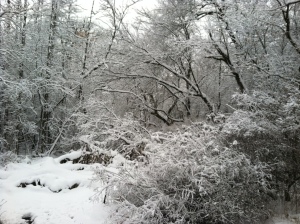 Underbrush … I wondered what animals were hidden in it.

My mom (who is almost 88 years old) just flew home after visiting me for a week. It was one of the quickest good-byes I’ve ever had at an airport. I think we were both afraid … afraid of the tears, afraid in case this is the last time we ever see each other. At her age, you never know. For someone who struggles with depression and BPD (me), you never know. These days in general, you never know. And we now live 2,000 miles apart. 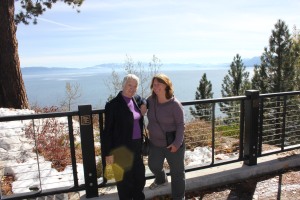 my “Stoic Swede” mom and me in Tahoe

My mom knows that depression has plagued me most of my life, but she doesn’t know about the BPD and I don’t plan on telling her. She’s seen many of my scars. Some she asks about, most she doesn’t. Although she is quite educated and was a nurse and educator, she gets quite anxious at any indication that I might be struggling to cope psychologically with anything or be seeing a psychiatrist or psychologist. It worries her that there’s something wrong with me … Partly because she will then blame herself. So, I keep it to myself. I wore long pants and sleeves while she was here. I was continually conscious of myself and what she could see.

It was a good visit, setting her mind at ease that our move out here was right for me. The mountains help me to feel settled, grounded in a way the midwest did not. The movement of the American River soothes me whenever I am able to be near it and watch the sun reflect off its surface as the water rushes around and over rocks.

This is only a few miles from my house! The Forest Hill Bridge in the back is the 3rd highest in the US

I continue to have moments when my anxiety and fear of loss and abandonment overtake me. I had some even while she was here and again as I said good-bye. Will those ever go away? I’m beginning to doubt it. That is my cross to bear or fountain of youth to seek. Am I Don Quixote fighting windmills in my mind?

In my last post, I was very discouraged about how few people were reading my blog. I contemplated the suicide of my blog and the word suicide was in the title. Suddenly, there were many more hits and several comments from readers saying they were reading, even if they weren’t commenting. Thanks for the comments that were made to that posts. They helped. I guess I need to keep fighting my windmills and some of them might turn out to be real and I can win the fight! Others will taunt me as they will. More scars may come from the fights, but I will fight to the end – never giving up hope for happiness in life. Not just fleeting moments, but deep seated, know it in my bones and it shows in my face real happiness.